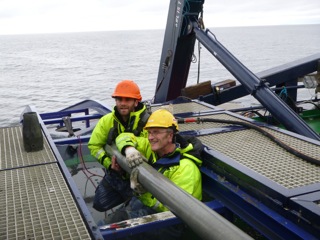 We’re at around 150 deg east, north of the New Siberian Islands. In fact we just took a turn around Bennett Island which is the first sight of land since Norway, it looks a bit like Svalbard with an ice cap and glaciers. Currently steaming out of the Laptev Sea and into East Siberian Arctic Sea. Most of the last 10 days has been South of the ice front but yesterday we came back into it so we’re intermittently crushing our way through a beautiful landscape of pressure ridges and pure blue meltwater lakes. It’s nice to see it back but it does slow us down.

So this has been a big muddy learning curve, sampling, coring, pistons, slicing, methane analysis, O2, la la la! Mostly we’ve been taking short tubes of mud using the multi-core, 8 at a time, 15-40 cm-ish, simple operation but can take an hour or so to go from the surface to the bottom in 3000m seawater. That’s the easy bit, then we have to divvy them up to different people for methane, O2 etc. and also archive our own and then slice one which if you’re unlucky involves dividing 40 cm of mud into half cm sections putting a bit into a little vial and the rest into a bag. This is an arse! This takes place at designated stations (and opportunistic ones as well) so the last couple of days has seen a multi-core cast every 4 hours or so. This is also an arse as you don’t have time to sort out the mud from the last station before you hit the next one. Things have eased off with the return of the ice and the fact that the stations are further apart. Patrick Crill has given me his Louie Louie playlist, 28 versions of Louie Louie from Motorhead to Barry White. This is our core slicing soundtrack.

In addition sediment collecting I’m the underwater camera operator. We’ve got a GoPro in a metal housing that I’ve strapped to the corer to film the bottom. It’s awesome, you don’t know what you’ve got until you download it and then all these surprising things pop up. I now have 100+gb of underwater film – mostly shades of green and blue interspersed with moments of pretty exciting action and a brittle star snuff movie.

On our third attempt with the piston core I think we struck sedimentary gold. The first was thwarted when the shackle wouldn’t go through the pulley, the second landed on its own trigger weight, which Martin Jakobsson says never happened to him in 500 cores, it fell over and sucked up a load of crap from the seabed. Remembering this thing is 9m long and weighs well over a tonne! The third was text book. We appear to have recovered 4.5m down to what was the beach when the tide was much further out so 11000 years ago. 11000 years in 4 and a half meters of mud. We cored the holocene! Vladimir was impressed, he said (in heavy Russian accent) “No-one has done this in 15 years, you are the first of the new generation. The Germans tried but they only got 30 cm. They said it was not possible but we said maybe the arms are not connected to the shoulders but to the ass!” This is the translation of an apparently classic Russian insult. We felt like heroes and beer was consumed.

Having an awesome time, mostly grinning like a Cheshire cat, daily (more like hourly in most cases) thoughts:

I’m in the Arctic!
Look at that!
Polar bear!
It’s the Lomonosov Ridge!
We cored the Holocene!
I’m on Oden!
Ice!
Lunch!

Hanging out with lovely, weird, eccentric, dedicated people
In the halls of my heroes.