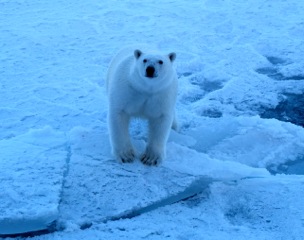 Well, this has been a strange and eventful phase in the SWERUS cruise. Mostly nothing involving science as we’ve been parked in an ice floe for nearly 2 weeks. Have been keeping amused with chores, cleaning, splitting cores, writing piston core manuals…

And we had Surstromming, the rotten fish in a can. Just a brilliant experience, smells a bit shit has to be said, the fish looks like it’s boiling when you open the can but actually appears remarkably fresh. We opted into it – not everyone joined – and we set a table in the helideck storage area with a big garage door to open for fresh air and a view aft. The fish is actually fine, salty and anchovy-like. Fish and potatoes and bread and onions, beer and aquavit, rounded off by homemade beavers ass vodka, created by steeping a gland from the beavers ass in a jam jar of vodka for a year and then diluting it with more vodka, apparently contains aspirin and tastes like it. (Poor beaver!!! Sue)

Last night we had the end of cruise dinner. Was just putting the finishing touches to bow ties for me and Tommaso when a big female polar bear turned up. She came right up to the ship and sniffed and rolled over and stood up and fooled around. She had a big gash on her leg but looked pretty ok, maybe a walrus fought back or a male bear or something. They had to drag us in to sit down and eat dinner.
Time confusion – aha we have to sync with Barrow time which is 8hrs different so, brilliant solution – we have the end of cruise party, stay up all night, have first breakfast at 8, go to sleep, put clocks back, get up 8 hrs later and have second breakfast. Complete genius!
Steaming for Barrow now and landing in Stockholm on the 24th so should be back morning of the 25th. Looking forward to green and maybe some sun if you have any left?