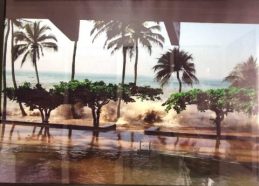 There were two waves. The first hit the coast at Hikkaduwa without warning, stopping the train, washing away shelters and boats. And then the sea vanished towards the horizon, leaving fish flapping on the never-before-revealed sand. People, children, rushed out onto the expanse in wonder, collecting the fish. There are many deeply upsetting images in the Community Tsunami Museum at Peraliya which record the terrible catastrophe that befell Sri Lanka on that day. But the one I find most disturbing is the picture of children running out onto the sand after the first wave…

The second wave arrived half an hour later, five times the height of the first, travelling at 800 kilometres per hour. It tumbled the train, in which many passengers had remained, believing it would offer shelter. Forty thousand people died in Sri Lanka, half a million were made homeless.

At the Eden Project that Christmas we had made a new festival, ‘Time of Gifts’, to celebrate our communities and the drawing together that happens in the dark times. We had made beautiful lantern boats, carrying Hope Ropes, to which people were invited to attach their wishes for the New Year. Before Boxing Day there were plenty of hopes for new bicycles, new computers, new jobs, new romances. After the 26th every single wish was for the people who had had their lives torn apart by the cataclysm around the Indian Ocean. It was so very far from us and our lives. But people wanted to do something, anything, even something as small as a child writing a wish on a label.

Fifteen years after the Tsunami, the scars are still present everywhere. But human beings are resilient, creative. They make a life, in the face of natural disaster and human cruelty. We have witnessed this over and over again, in Kosovo, in the West Bank, in Cyprus – rebuilding, raising children, making music, cooking feasts. I hope to hear some of these stories over the next few weeks, I’ll post them here…